Life After Life by Kate Atkinson 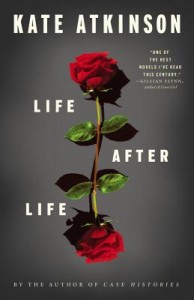 Haven’t I been here before? I’ve asked that question many times in my life. Some places and experiences just seem so familiar. And so I’ve wondered why that deja vu feeling keeps recurring. Well, get ready for that feeling again. In Kate Atkinson’s Life After Life the main character, Ursula Todd, gets to experience her life over and over again. She is continually reborn throughout the 20th Century. The constant re-telling/re-living of her story never gets tedious, even when you think you know how it will play out. Episode after episode, life after life, I felt compelled to keep reading. England through two world wars, Germany during the rise of Hitler, Ursula’s lives play out with ever-changing consequences. I couldn’t possible tell you how many lives she lives, it doesn’t matter. I just wanted more and more as the book unfolded. I suspect you might find the same interest.

This is technically not a book on time travel but the many lives give that sense of going back in time. It made me think of other books that have a similar feel: The Man in the Empty Suit by Sean Ferrell had a similar feel, but one that created a bit of vertigo trying to remember who was who. Thumbs up to Sean Ferrell. Take a look at Replay by Ken Grimwood for another deja vu experience of lives relived. Soon, we’ll post a lot more about books that deal with time travel, fiction and non-fiction. Stay tuned.